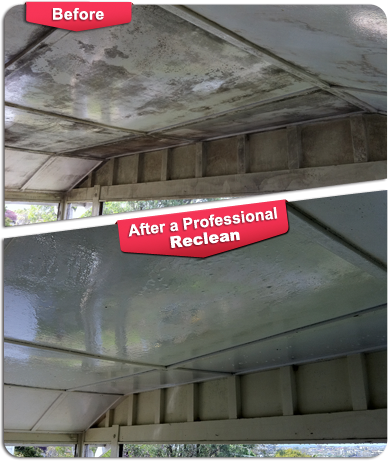 The dangers of mould are very real. So call 1300 437 221 today to safeguard yourself, your family and your property with our effective mould removal services.

Mould is the unwanted fungus that grows on everything from food and clothes to walls and ceilings. It is often recognised by its black, green or white colouring and often appears as a stain or discolouration on a surface. As well as looking dirty and unappealing, mould can also be very dangerous to health and safety, making mould removal absolutely vital.

What are the risks of mould?

Many types of mould can have a hazardous impact on the health of your family without you even realising it. In fact, it has been predicted that approximately 5% of the Australian population will experience allergic symptoms to mould at some stage in their lifetime. In addition, black mould has been found to be responsible for more than 100 types of lung conditions.

The dangers and health effects of mould include:

Depending on each individual’s immune system, the health effects of mould can vary from being simply annoying to being life-threatening. So don’t let your family live in danger any longer – undertake professional mould removal today with Reclean!

Mould doesn’t just look unattractive; it can be as detrimental to your property’s structure as it can be to your health. It damages paint, metal, wood and mortar, making buildings unsafe, unsightly and less valuable. It is expensive to treat after the damage is done, and the longer it’s there, the harder it is to get rid of.

How do I get rid of mould?

If you think painting over mould is a viable solution, then think again. Even when you paint over mould, it will actually continue to grow underneath the layer of paint. Over time, the mould will eventually push its way through or the paint will start peeling off. Ultimately, you will find yourself back where you began, with the same or perhaps even worse mould problems.

So forget painting over mould and invest in something that will really do the job – Reclean’s professional mould removal service! Not only will our house washing services eliminate your mould problems, but we’ll leave your house sparkling clean too.

With the help of Reclean, mould removal is so easy! All of our Brisbane house washing services come with a free mould removal treatment which will last up to 12 months. By having our professional cleaners come in and expertly remove the mould that’s plaguing your house, you can rest assured that your house and your loved ones are truly safe and protected.